Classification of hair loss in men

The most widely used classification for hair loss was given by Dr. Norwood, according to which the hair loss starts in both the temporal areas and also vertex which then progress to involve whole of the top portion of the scalp. This progression is seen in the Norwood system of classification.

Type II: Start of the recession of hair line or there is some recession in temporal region.

Type III: More marked deepening of the recession in the temporal region and may also involve crown or vertex area where it is then called Type III vertex.

Type IV: Characterised by increase in hair loss in frontal region as well as on the vertex but both region are still separated by band of hairs across the top.

Type V: The area of hair loss increases in the front and the crown area with either sparse band of hair separating the two regions or the bridge between the two region has started to break.

Type VI: This stage is characterised by disappearance of the bridge of hairs, which forms a large area of baldness in front and on the top of the scalp.

Type VII: This is the severe form of baldness where only horse shoe shaped band of hair is present from one side to another including the back of scalp. 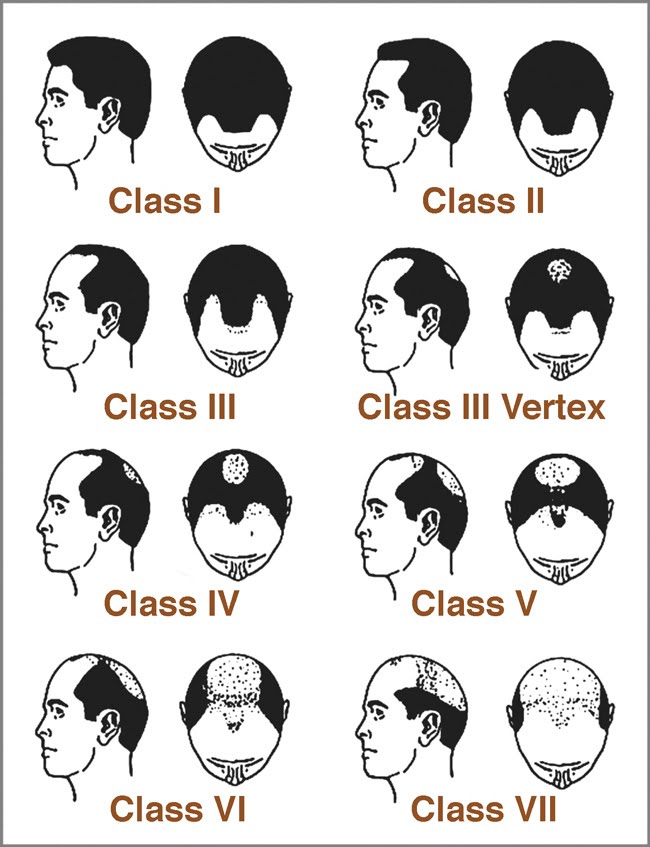 In addition to this type II-V can be described as having Type A variant which is characterised by recession of the entire hair line without the hair loss in the vertex area so that there is no connecting bridge of hairs between the frontal and the vertex area. 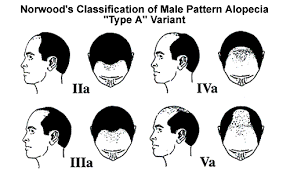