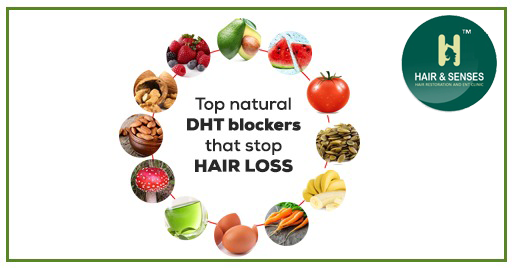 DHT or dihydrotestosterone is not a word one hears often, or at all even. But the moment someone starts losing hair, it is likely to be one of the first words you find when you start researching or talk to a doctor. DHT, the main culprit behind male pattern baldness or Androgenetic Alopecia, is an androgen, which gives men their male characteristics. It is produced by the body as a byproduct of testosterone.

So how does DHT cause hair loss? According to the National Center for Biotechnology Information, U.S. National Library of Medicine (NCBI), “In balding men DHT binds to androgen receptors in susceptible hair follicles and, by an unknown mechanism, activates genes responsible for follicular miniaturisation.”

Miniaturisation refers to a process in which hair follicles shrink, causing the hair to fall out. To understand the process better, it is important to understand the hair growth cycle. Hair grows in three phases: Anagen or the growth phase, Catagen or the transitional phase, and Telogen or the resting phase. In hair follicles which are genetically predisposed to falling permanently, DHT makes the hair cycle shorter, because of which the hair in these follicles cannot grow fully. They start becoming thinner, and decrease in both size and diameter. Eventually, the hair falls permanently.

The question now is what does one do to stop such hair loss. There are drugs available in the market like Finasteride or DHT blocking shampoos, which are recommended for hair loss patients. Finasteride can inhibit the enzyme—5-alpha-reductase—which converts testosterone into DHT.

However, there are also some natural DHT blockers, which can be used.

Saw Palmetto
One of the most widely used natural DHT blockers is this fruit from small palm tree native to the U.S., which is used to make medicines and is said to be effective in arresting hair loss. Saw palmetto is an anti-androgen or a compound that, according to NCBI, has the biological effect of blocking or suppressing the action of male sex hormones such as testosterone within the human body. Research says that Saw Palmetto can block 5-alpha-reductase.

Tomatoes
Tomatoes consist of the antioxidant called Lycopene, which is a natural DHT blocker. However, if you are adding more tomatoes to your diet, use it as a sauce rather than raw as Lycopene is better absorbed from cooked tomatoes.

Almonds
Apart from being rich in protein and good (polyunsaturated and monounsaturated) fats, which are great for hair growth, almonds also contain L-lysine, which is a natural DHT inhibitor.

Flaxseed
A study conducted in 2013 showed that flax can lower testosterone levels and decrease prostate weight, both of which indicate that it inhibits 5-alpha-reductase. Chemical compounds called lignans give flax these properties. Flaxseed is also rich in antioxidants and Omega-3 fatty acids which are beneficial for hair growth.

Bananas
Bananas are rich in Biotin, which plays an important role in hair growth. The fruit is also rich in antioxidants, potassium, vitamins, and natural oils, making it an excellent food for hair growth as well as your overall health.

Reishi Mushroom
The rare mushroom, which grows on deciduous trees in the hot and humid climes of some Asian countries, is known for its various medicinal properties. Studies show that it can boost immunity, fight fatigue, and has anti-cancer properties. The Reishi mushroom is also known to be effective in inhibiting the 5-alpha reductase enzyme.

Pygeum bark
The bark of the Pygeum tree, which is used for treating symptoms of prostate cancer or an enlarged prostate, is said to be effective in reducing levels of DHT.

Kale
Counted as one of the most nutritious foods, the leafy, green vegetable is a rich source of beta-carotene and vitamin C, flavonoids, and polyphenols. It fights aging, and is known to fight cancer as well. Kale is also a source of zinc, another natural DHT inhibitor, making it an excellent food for fighting hair fall.

Licorice
Licorice or ‘sweet root’, which is widely used in food and medicine, is another substance that can reduce testosterone levels. A study conducted in 2003 showed that women who took licorice saw a drop in testosterone in a month, and it came to normal after they discontinued the licorice, implying that licorice could be helpful in blocking DHT formation.

Sesame seeds
A 2013 study said that sesame seeds can be natural DHT blockers. These seeds, which can easily be eaten in salads or smoothies, or sprinkled over various foods, contain essential fatty acids, polyphenols, and sterols. According to the study, the sesame plant is one of the richest food sources of lignans, and it has various properties including anti-aging, antihypertensive, and anti-inflammatory.

Eggs
Eggs are a great source of Lecithin, which is a fatty protein that can help hair become less brittle. Eggs also contain vitamin A, vitamin B1 and 2, vitamin B5, vitamin B7, which help hair growth, nourish hair follicles, and can slow down the greying of hair, and help cure dry, flaky scalp. Eggs contain biotin, which is a natural DHT inhibitor. Eggs are also a source of essential nutrients like iron, phosphorous, iodine, sulphur, zinc, calcium, and magnesium.

Pumpkin seed oil
The amino acids present in this oil are said to have DHT-blocking properties. It is rich in fatty acids, minerals, and antioxidants. It can be ingested, and it is known to block DHT formation.

Green Tea
Green tea has a catechin or plant phenol called epigallocatechins (EGCG). Research shows that epigallocatechins can inhibit the activity of 5-alpha-reducatase, and hence act as a natural DHT blocker.

Beta-Sitosterol
A naturally-occurring phytosterol or compound found in plant cell membranes, Beta-Sitosterol is found in foods like soybeans, avocados, and nuts. Studies shows that it helps in improving urine flow in men who are suffering from benign prostatic hyperplasia (BPH) or enlarged prostate. And, because DHT is one of the causes of BPH, it has led to speculation that beta-sitosterol potentially blocks DHT.

Other foods like mushrooms, flaxseed, carrots, cashews, and berries are all good for the hair, and they help nourish it and help keep the scalp healthy. However, even if the DHT blockers listed here are natural, it is recommended that you consult a good doctor before taking them. They can also guide you towards hair loss treatments like hair transplant, which is the only permanent solution to hair loss.